surprise! read an excerpt of my new, unscheduled book release!

Surprise! I released a new book today! Who Needs Mistletoe? is a holiday romantic comedy about a pair of up and coming country music stars trying to get across the country in time for Christmas. The journey is full of misadventures and plenty of banter.

To celebrate the release, I wanted to share an excerpt from the book with you. In this scene, Charlie and Flint are still early in their trip when they have to make an unplanned overnight stop at a motel in Iowa . . . 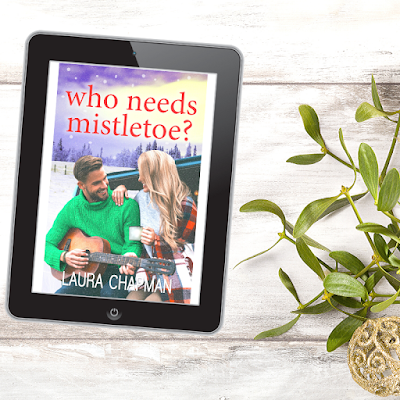 Flint opened the door to their room, and his stomach twisted. As far as roadside motels went, it left plenty to be desired. A midsized TV was perched atop a chipped dresser, which was connected to an equally scuffed-up desk. There was a chair in the corner that looked like it had seen better days. The bed was covered with a floral spread that looked like it had been around since George Strait started touring.

The bed. One bed.

Charlie stepped in around him and lifted a shoulder. “It isn’t the Plaza, but it’ll do.”

Gently setting her guitar down, Charlie dropped her oversized purse on the desk and shrugged out of her jacket, draping it over the chair. Flint remained frozen at the door, gaping at her.

Plugging her phone in to charge, she didn’t bother to look at him—or the bed. “Right.”

“You must’ve been a whiz at math growing up.” She spared him a glance then. “Would you mind closing the door? I can see my breath.”

She was exaggerating—and completely ignoring the issue. But Flint obeyed her all the same and nudged the door closed. Not wanting to make the situation any more tense—but also determined to make her see what was going on—
Flint eased his guitar onto the floor next to hers.

Slowly removing his own coat, Flint cleared his throat.

Her blue eyes met his stare. “It’s not ideal, but we can make it work. Can’t we?”

“I just thought, what with you being a woman, and me being, well, me. And you having a boyfriend.” He was rambling now and sounding more and more like a square with every passing second.

A slow grin spread across her lips. “Are you blushing?”

“Your cheeks are red.”

He had no doubt they were. But that didn’t mean she had to call him out on it. Not when he was trying to be respectful of her and their sleeping arrangement.

“And who’s the one who left the door open all night?”

“It was long enough.”

Swearing under his breath, he scratched the back of his neck. “Look, I’m just saying I don’t want to make this weird.”

“It’s a little late for that, don’t you think?”

The smirk on her full lips returned.

Ignoring her question, he dumped his bag on the scuffed-up desk, briefly wondering if he should be a gentleman and offer to sleep on the chair. But he was wiped. If was going to drive them halfway across the country the next day, he needed to get some rest. Good rest.

Like that would be possible with Charlie sleeping only a few feet away. Even if he kept his overactive imagination in check, he’d still be sleeping next to another person. It had been longer than he cared to admit since he’d shared a bed with a woman. Let alone a woman he . . . Flint cleared his throat and shifted on his feet.

From across the room, Charlie flung the closet open. After taking a quick survey of the contents, she leaned up on her tippy toes to reach the top shelf. Manners got the best of him, and he started toward her. But before he could do anything, she pulled down a comforter and a pair of pillows.

“If it makes you feel better, one of us can sleep under this, and we can build ourselves a barrier with these.”
He threw up his hands. “Whatever.”

He was done pushing the issue. She was right. They were both adults. They could share a bed in a completely platonic way for the night.

“Please tell me you aren’t going to be weird about this.”

“You’re being weird,” she insisted. “So weird.” She pointed at him accusingly. “Look at the way you’re standing there with your arms crossed. You look like a toddler whose mama just said he had to share a cupcake with his baby sister.”

Glancing in the mirror over the dresser, he saw that she was right. Posture rigid, frown set, he looked every inch a petulant child on the verge of pitching a fit. Muttering a curse, he dropped his arms to his side and tried to relax. As if he could. Fine. Maybe he was being “weird” about their predicament. But Charlie was dead wrong about his reasons.

For one, she wasn’t his sister. Besides having the near-constant urge to pummel anyone who caused her even a moment’s concern, he didn’t have a brotherly thought or feeling toward her. Which came to the second point. Charlie wasn’t asking him to share a snack. They’d be sharing a bed. The very place he’d imagined them being during one of the many times he was having less than brotherly thoughts about her.

So really, it had nothing to do with him having a problem sharing. If it came down to cupcakes, he’d let her have them all. This was a matter of his own sanity.

Flint liked to think he was a gentleman. Charlie was off-limits, which meant he’d keep his hands to himself. But darn it all, it would be like standing too close to a bonfire. You might not reach out and touch it, but that didn’t mean you wouldn’t end up overheating or even getting a little burned.

He could tell Charlie all that to save face, but then what? If he showed his hand now—after all these years—nothing would be the same between them again. That was something he wasn’t willing to risk.

He’d have to risk playing with fire and hope he came out unscathed.

Swallowing hard, Flint motioned toward the bed. “We’ll share the cupcake. You choose which half you want.”

About the Book
Charlie London has finally made it. She’s the lead singer of a rising-the-charts band. She’s casually dating Hollywood’s golden boy. And she has a publicist who works very hard to make sure everyone knows all of this. But when her band is bumped from a televised holiday concert—and her boyfriend is photographed canoodling with a co-star—just days before Christmas, Charlie’s perfectly crafted world is crumbling apart. She impulsively hops a flight to Jackson Hole, Wyoming, so she can bring her boyfriend in line and get her career back on track. Her plan seems to be working until a winter storm leaves her stranded en route.

Guitarist Flint Randal has been crazy about Charlie from the moment she walked in to audition for their band three years ago. Knowing her strict policy against dating a bandmate, he’s kept his feelings in check. Until now. When grounded planes send them on a cross-country road trip—alone—Flint sees his chance to finally prove that her one-and-only has been there all along.

As detours and disasters plague their journey, Charlie and Flint grow closer. Will the magic of the holiday season—and the promise of true love—bring them together at last? Or will the siren call of fame get in the way?