my interview with the stars of 'playing house'

Blogger's Note: This post originally appeared on the Playing House blog tour. It is no longer published online, but since it was so much fun, I wanted to make it available to you readers. The prompt for this post was: You and some of your characters meet for dinner. Describe the evening. Would personalities clash? Who would attend? I hope you'll enjoy reading my imaginary dinner with Bailey and Wilder. 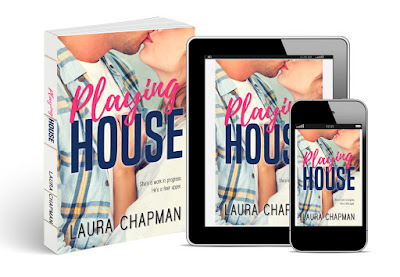 I can’t believe I landed what might be the greatest interview of my journalism career. Forget that I quit being a journalist years ago to go into public relations, because I am officially back tonight.

After another busy week of filming their hit TV show on the Design Network, the stars of Playing House with Wilder and Waverly have agreed to meet me for dinner. We’re dining at a bar and grill on the outskirts of Austin, Texas, which happens to be one of my favorite towns and where they’re filming this season. I’m so excited I arrive at the designated restaurant a few minutes early. I don’t mind the wait because it gives me ample opportunity to watch two of my favorite on-screen personalities arrive. I hope they’re as quirky and funny—not to mention, talented—in person as they are when I binge-watch episodes of their show.

About ten minutes after the appointed time, I spot Wilder walking through the door first. Oh, he’s good looking. Maybe not in the same way as Ryan Reynolds or Chris Pine, but definitely in an “I would totally be tempted, even though he’s taken” way. He’s wearing his trademark five o’clock shadow and a flannel shirt over his broad shoulders. Yeah. I’m tempted. I strain my eyes to find Waverly, but instead he guides another woman toward our table. Clad in a complimentary plaid shirt—did they plan this?—and jeans, her honey blonde hair is pulled away from her face in a messy ponytail.

“Hey, sorry we’re late,” Wilder says, shaking my hand as I rise to greet them. “Filming ran long today. I can’t say much more until the episodes air, but we’ve had a major setback with one of our houses.”

“I’m sorry to hear that. Hope everyone is okay.”

I wait, exchanging a nervous grin with the unknown woman and hoping Wilder takes a hint and introduces us. It only takes a moment—and a light nudge in the ribs from his guest—for him to catch on.

“Forgot my manners. Laura this is Bailey. She’s a local designer working with us this season. She’s . . . helping Waverly out.”

“Nice to meet you.” We shake hands and I glance at the door again. “Will Waverly be able to join us too?”

“No, she’s in New York this weekend. Working on her new book.”

“Yeah, well . . . Bailey has been a Godsend. Helping us figure out what to do and how to do it right. I don’t know what we would do without her.”

We take our seats and place our orders with a server. Once we’re settled, I turn on my recorder and pull out a notebook and pen.

“So Wilder,” I begin. “How has it been working in your home state after all these years away?”

“Great. I love the experiences I’ve had in New York, Toronto, and everywhere else we’ve been. But my heart is here in Texas—more than ever now.” He clears his throat and tugs at his collar. “I mean, it’s been nice to see my parents. Especially for Virginia. They’re having a lot of fun spoiling her.”

“And how is your daughter?”

“She must keep you and Waverly busy.”

“Yep. But we’re enjoying it. She’ll be going to school, soon, and we won’t see her around set as much.”

“Wow. I can’t believe how fast she’s growing up. It seems like she was a baby five minutes ago. Where will she go to school? Will you film around it?”

Wilder sighs and shakes his head. “We’re still figuring it out. I never dreamed we’d still be doing this after so many years.”

“Gotcha.” I scribble down a few more notes then turn my attention to Bailey. “Tell me about yourself. How did you end up on the crew?”

“It’s a lot of fun. They’re a talented group and I’m learning a lot.”

Hmm. This interview isn’t going how I planned. First, Waverly is a no-show and her sub isn’t much of a talker. Actually, Wilder isn’t either. I haven’t worked this hard to get sources to talk since I was in journalism school. It’s like they’re hiding something.

Our food arrives giving us a short reprieve from the awkward Q&A session. My tuna melt looks and smells mouth-watering, as does Bailey’s cheeseburger platter. Wilder’s cobb salad—sans bacon and dressing—looks . . . edible.

Bailey rolls her eyes, which is the most reaction I’ve had from her since the interview began. “He worries way too much about his weight. So vain.”

We both notice a bit of ketchup on her chin. I’m about to tell her when Wilder reaches over and wipes it off. Then he strokes her chin in a gesture way too intimate for co-workers.

They face me in unison. Bailey’s jaw falls open, but she remains silent. Stricken. Wilder recovers first and narrows his eyes.

“We’re going to have to go off the record or you need to change the subject. Fast.”

Off the record. That would mean no more inside scoop for you, dear reader. No big interview or scoop for me. No return to journalism. But going off the record means satisfying my own curiosity.


About 'Playing House'
She's a work in progress . . .
Bailey Meredith has had it. As an assistant at a prestigious interior design firm, she’s tired of making coffee and filing invoices. She’ll do just about anything to get out from under the paperwork and into the field for real experience. Then she sees an ad for a job that seems too good to be true.

He's a fixer upper . . .
Wilder Aldrich knew she would be perfect for the crew the moment he saw her. His hit home improvement show only hired the best, and Bailey had potential written all over her. It isn’t just her imaginative creativity and unmatched work ethic that grabs his attention. There’s just something about her.

With chemistry on screen, it’s only a matter of time before sparks fly behind the scenes as well. But with Bailey’s jaded views on romance and a big secret that could destroy Wilder and everyone he cares about are either of them willing to risk it all for love?


***Let's take this relationship to the next level. Join my Facebook Reader Group for in-depth discussion on everything from books to our favorite binge-watches. Follow me on Facebook, Instagram, and Twitter for day-to-day shenanigans. Subscribe to my monthly newsletter AND score a free copy of one of my books as my thanks to you. You can also find me on Amazon and BookBub.***
Posted by Laura Chapman No comments: