where do you get your story ideas and inspiration?

Blogger’s Note: For the next few weeks, I will run a series answering some of the frequently asked questions I receive from readers and fellow writers. If you have any questions of your own that you would like me to answer in future posts, please leave a comment. 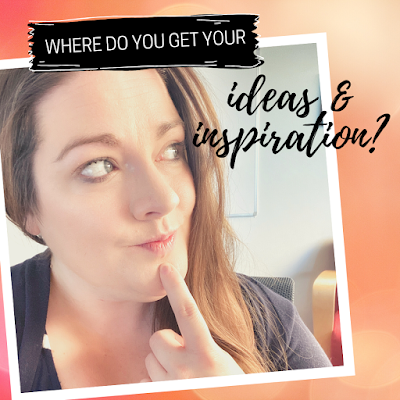 Question: Where do you get your story ideas and inspiration?


This is probably my most frequently asked question (and the one I most like to know from fellow authors). The short answer: I get my story ideas and inspiration everywhere.

But that is too simple and boring of an answer, so here are three of the top ways I get story ideas.


It’s totally cliche to say this, but it’s also true: I find inspiration all around me. I am often struck with ideas for new story ideas while traveling. Whether it’s a trip around the world to Australia or a drive through town, I get lots of ideas while in motion.

Example: I came up with the name for Everett in “Making Christmas” while thinking about the story on the morning commute to my day job. I drove past Everett Street and knew that was my guy.

And while none of my stories are truly autobiographical, some moments from my real life have made cameos in my story.

Example: I came up with the idea for the Queen of the League series during my first two seasons playing fantasy football. While I sadly did not fall head over heels for any of my fellow league-members (which is maybe a good thing, as most of them are married) I was halfway through my first draft when I realized this could make for a fun story.

I even worked in the story of how I sprained my ankle during a less-than-sober post-football night on the town into “First & Goal.” While researching homeopathic ways of fixing my super sprained ankle, I read up on RICE (rest, ice, compress, elevate). And that little nugget went on to inspire multiple scenes in the story.

But, really, real-life inspiration can come from everywhere. Big and small.

2. Playing Twenty Questions . . . with Myself


For me, my story ideas often begin with a series of questions. As a former reporter (and someone who has both input and learner in her CliftonStrengths top five), my life pretty much revolves around asking questions and getting the answers. Or, in the case of being a romance writer, I make up the answers. It all starts with one question, which quickly turns into a whole series until the characters and stories take shape.

Example: “The Marrying Type.” After reading Jane Austen’s “Persuasion” I wondered: What would Anne Elliot be like in the twenty-first century?

The first idea that popped into my head: a perpetually single, second-generation wedding planner trying to save her family’s elite business. Also, her father would be trust fund rich, but he’s run through all of the money and now the family business is on the rocks.

That realization quickly answered the question of how Lady Russell would work into a modern story. She runs a swanky and famous bridal boutique like Lori Allen’s in “Say Yes to the Dress: Atlanta.”

The next question: How would modern day Anne Elliot and Captain Wentworth meet? I figured college was a safe bet. Maybe they met in a class, and he was a little older. Maybe he was a kid from the “wrong side of the tracks” and was headed for a career field that was too risky and below Elliot’s father.

Which led to the biggest question, and the one that ultimately took the longest to answer: Just what job exactly would a modern day Wentworth have that could be so upsetting to a snooty father? For about two weeks, he was an NFL football player. That seemed like a modern day war hero of sorts. Plus, I could see how a young man dropping out of college to enter the draft might be a difficult pill to swallow. But as I got into the second or third chapter, it just didn’t work.

For another few weeks, Captain Wentworth was a big-time author. That probably had more to do with the fact that I was watching “Castle” every week and going through a Nathan Fillion phase. That didn’t feel quite right either.

Then, I had the thought. When I was in college (which would have been about the right age for my characters) no parent would I knew would have supported their child dropping out to become an app developer or social network creator. They would’ve said “you’re crazy, go to class.” Once I imagined modern Wentworth as a big-time social media developer, everything else just kind of fell into place.


A couple of winters ago, I was in the middle of a particularly toxic bout of writer self-loving when I found my muse. I was deep into a binge-watch of “The Crown” again when Netflix suggested I check out some other British programming. Seeing that as a perfectly valid vessel for procrastinating and prolonging my stretch of not writing, I clicked on a show called “Secrets of Great British Castles.” Halfway through learning about the Norman stronghold at Dover (spoiler alert: almost all of the castles on the show were apparently once Norman strongholds) I knew I had to write some fan fiction about the host, Dan Jones.

For those of you who haven’t met my muse, Dan Jones is a tattooed, leather-jacket wearing historian who writes books about the Tudors, the Plantagenets, and so on. He also hosts TV programs.

I was still early in the planning stages of “Counting on You,” the first book in my Amarillo Sour series. But I knew then that I had to add a minor character based on Dan Jones. I also knew I would help that bad boy historian find love in the next book.

And that’s how Dan Jones served as my inspiration for Professor James Mitchell, the hero of “Let It Be Me.”

Of course there are plenty of other ways to find inspiration for stories. Here are a few suggestions you might consider trying if you’re stuck:


What are some of the ways you find inspiration for your stories?


***Let's take this relationship to the next level. Join my Facebook Reader Group for in-depth discussion on everything from books to our favorite binge-watches. Follow me on Facebook, Instagram, and Twitter for day-to-day shenanigans. Subscribe to my monthly newsletter AND score a free copy of one of my books as my thanks to you. You can also find me on Amazon and BookBub.***
Posted by Laura Chapman 2 comments: